Green bonds have suffered a setback as investors shunned debt markets amid the coronavirus pandemic, but experts say the sustainable debt instrument is showing signs of bouncing back, with recent issues heavily oversubscribed as issuers return to market.

Demand over the long term will resume its upward trend as investors tap the bonds for their preferential pricing, issuers maintain their climate change projects and governments use the instrument to jump start economies, experts say.

Although a tiny fraction of the overall debt market, green bonds — debt that finances environmentally friendly projects such as wind farms or solar power — have grown rapidly over the last eight years, from virtually nothing in 2012 to $254.9 billion in 2019, based on figures from the nonprofit Climate Bonds Initiative, which promotes green investment. 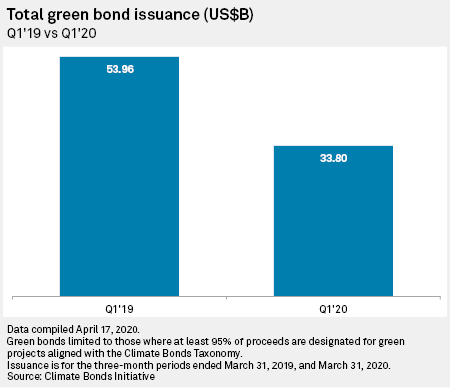 According to the CBI, March issuance fell 83% on the year and 82% on the month to $2.8 billion, representing the lowest monthly issuance volume since December 2015.

There are positive signs, however. China, the first country to suffer the effects of the coronavirus, may signal the sort of rebound green bond markets in other parts of the world can expect as economies begin to reopen from the pandemic. Green bond issuance in China shot up to nearly $800 million in March from less than $200 million in February.

“Clearly demand is still sitting there if you can get a bond out the door,” Kidney said. “If you are in the green space and if you can raise debt now at these unbelievably historically low rates, I think you are going to see a lot of people doing it.” 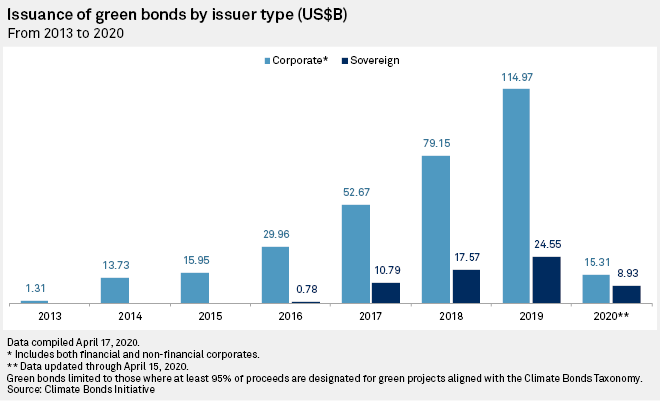 Historically, the green bond market has been dogged by poor supply. Issuance has failed to keep up with demand as institutional investors increasingly apply environmental, social and governance criteria to their investment decisions, leading to tighter pricing for the debt instrument.

New bonds typically price with a yield slightly higher than that on equivalent debt from the same issuer already trading in the secondary market, in what is known as a new issue premium. In a report on green bond pricing in the second half of 2019, the CBI found that seven of 19 issuances it analyzed priced with a “greenium,” indicating that they yielded less than existing debt, while three others priced with no new issue premium.

The yield reflects the coupon, or interest rate, paid on a bond adjusted for the percentage of face value paid by the acquiring investor. The yield falls as the price rises. 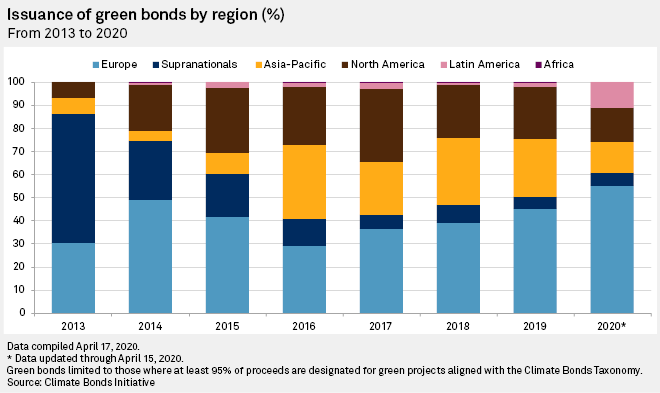 It remains to be seen how green bonds will perform relative to vanilla bonds during the market downturn. If they do fare better, it will act as a “turbo charge” to green bonds, Kidney said.

“You can imagine in a collapsing bond market you suddenly discover that bond X has less of a collapse than bond Y, everyone in the fixed income market is going to want to buy bond X,” he said.

According to CBI data, green bonds generally outperformed indexes in the second half of 2019, with 58% tightening more than their corresponding iBoxx bond index 28 days after pricing.

ABN AMRO said in a note that its index for green nonfinancial corporate bonds outperformed an overall corporate index but it was likely because green bonds are mostly issued by companies operating in defensive sectors.

Moody’s Investors Service green bonds analyst Matt Kuchtyak expects green bond issuance to slow in the first half of 2020 and then pick back up in the third and fourth quarters — although much will depend on how long the crisis lasts. Moody’s had originally forecast the market to grow to $300 billion in 2020, with a further $100 billion estimated for social and sustainability bonds, which finance social projects.

The market will also get support from governments as they tackle the economic impact of the virus, Christopher Flensborg, head of climate and sustainable finance at Swedish lender Skandinaviska Enskilda Banken AB (publ) said in an interview. The EU Green Deal, a wide-ranging program of green policies proposed by the European Commission, could also form the basis for finding tools to reactivate the economy, opening the door for huge green bond issuance.

“The green bond market might positively explode and increase massively toward the end of this year and in 2021,” Flensborg said.

This article first appeared on the website van S&P Global