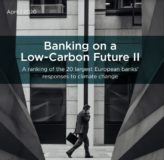 The European banking sector has made sluggish progress on tackling the climate crisis in the last three years, according to new research by responsible investment organisation ShareAction. The latest ranking by ShareAction shows the vast majority of European banks’ strategies on climate change are not aligned with the goals of the Paris Agreement: only 35% of surveyed banks claim their strategies on climate change are aligned with limiting global temperature rises to 2°C or below.

19 out of 20 of Europe’s largest banks submitted information to ShareAction, which then ranked them on their performance on tackling climate change. The research seeks to shine a light on how banks have progressed on this issue since 2017 when the last survey was conducted. The average score achieved in this survey is just 39.9%, while BNP Paribas tops the ranking with a score of 63.2%. Banks in the lowest end of the ranking, including Italy’s Intesa Sanpaolo, show little evidence of reining in the harmful impacts of their activities on the climate. No bank placed in the top ‘best practice’ category.

Credit Suisse, Commerzbank and UniCredit also perform poorly, with their approach classed as ‘business as usual’. However, one bank proves that rapid improvements to a bank’s approach to climate change are possible: Lloyds Banking Group comes second in the ranking, having been last in the first edition in 2017.

Banks are currently understandably occupied with the implications of the Covid-19 pandemic. The banking sector has an important role to play in this crisis and it is appropriate that banks prioritise their response to this. However, banks also have a role to play in addressing climate change and the systemic risks this poses to the sector and the economy.

On average, surveyed banks perform worst in the section on climate risk assessment and management (29%), which includes their position on financing carbon-heavy energies like coal, tar sands and other fossil fuels. While banks have largely stopped providing project finance for coal mining and coal power, they shy away from ending general corporate financing for coal-heavy companies, an area where their policies are generally non-existent or inadequate. Many banks merely exclude new clients while continuing to provide support to existing clients reliant on coal.

This needs to change. Investors are increasingly starting to challenge banks on their fossil fuel policies, as demonstrated by the shareholder resolution coordinated by ShareAction that was recently filed at Barclays. It requests that Barclays publishes a plan to phase out its provision of financial services (including project finance, corporate finance, and underwriting) to companies in the energy sector, and to gas and electric utilities that are not aligned with the goals of the Paris climate agreement. Shareholders are set to vote on it on 7 May.

On a more positive note, all surveyed banks appear to be actively looking to scale up green financing and develop a range of low-carbon products and services, from green mortgages to green bonds. However, efforts are slowed down by challenges in terms of defining what qualifies as ‘green’, a lack of company- and project-level data, and higher transaction costs.

In addition, for efforts on green finance to be successful, banks need to ensure that their approach to climate change is consistent across their entire business. There is a real risk that banks’ continued financing of fossil fuels will overshadow any positive impacts they might achieve through financing low-carbon solutions.

The overall poor results in this survey should be a real concern to shareholders, clients and regulators: a failure to meet climate goals will worsen the effects of climate change, including an increase in droughts, floods and extreme weather events, as well as sea level rises. This, in turn, will have negative impacts on banks’ portfolios in the years and decades to come. It is therefore in the interest of banks to take urgent and drastic measures today, to ensure a liveable planet for all of us in the future.

Sonia Hierzig, Joint Head of Financial Sector Research & Standards at ShareAction and author of the report said: “The findings of our research could not be clearer: the European banking sector is moving at a glacial pace on the climate crisis, failing shareholders, clients, and society at large. We expected much more progress to have been made since our last assessment three years ago, not a tinkering around the edges. Although some banks demonstrate leading practice in certain areas, the actions of some banks open them up to the risk of formal shareholder action, like that seen at Barclays this year.”

Emilie Westholm, Head of Responsible Investments at Folksam, said: “It is a big concern for shareholders that European banks are performing so poorly in terms of addressing the climate crisis. Folksam will continue to engage forcefully with the sector and hopes other investors will join in. A good recent example of such engagement is the shareholder resolution filed at Barclays, which is asking the bank to set phase-out targets for their financing of the fossil fuel industry. Folksam co-filed this resolution, and believes it deserves the support of every shareholder who recognises the importance of achieving the goals of the Paris Agreement.”

Jean-Laurent Bonnafé, Chief Executive Officer of BNP Paribas, said: “We are delighted to top ShareAction’s ranking for the second time. This is a strong recognition of the efforts made by BNP Paribas and its teams across the world to accelerate the energy transition and strengthen the management of climate-related risks. Among other achievements, we have announced an exit date for thermal coal financing, phased out from companies which draw the majority of their revenues from non-conventional oil and gas, also we keep working on implementing the TCFD recommendations and we report annually on our progress. However, it is a journey and more needs to be done. We will continue to ramp up our ambition to play our part in tackling the climate crisis and working with all the banking community on this objective.”

Fiona Cannon, Managing Director, Group Sustainable Business at Lloyds Banking Group, said: “We are pleased to have made such progress with our ambition to tackle climate change, grow the green economy and promote green finance, improving 14 places in the ShareAction ranking since 2017. While some challenges still remain around data and methodologies, we are committed to supporting our customers, clients and colleagues to help transition to a low carbon economy and ultimately help Britain prosper.”

Slavka Eley, Head of Banking Markets, Innovation and Products at the European Banking Authority (EBA) said: “This ShareAction report highlights that while the European banking sector is making progress in reflecting climate-related risks, there is way to go in integrating these risks fully into strategies, processes, risk management tools and transparency. The European Banking Authority (EBA) is actively contributing to the integration of ESG factors into European regulation and supervision“. 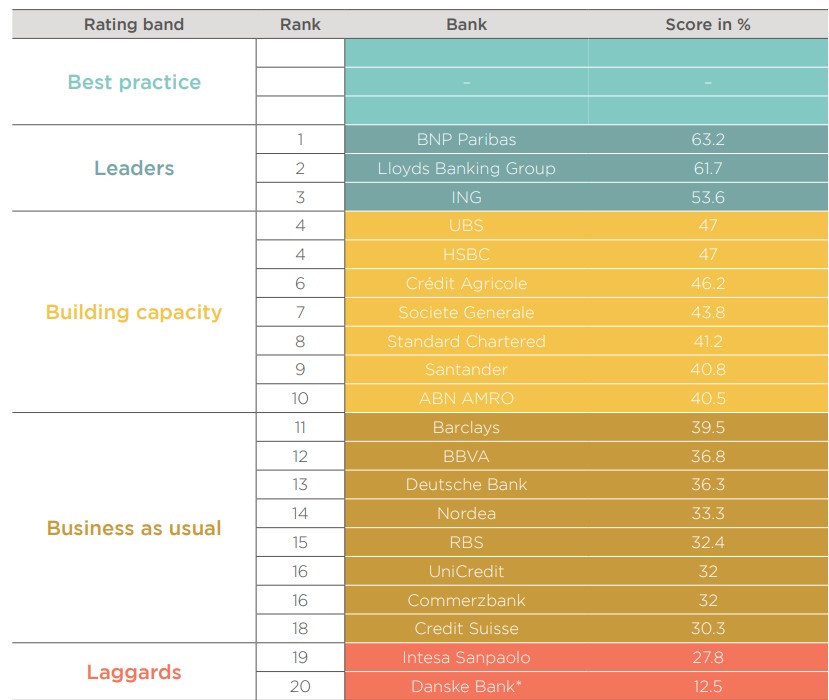