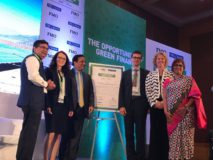 The symposium which aimed to shed light on the increasing investment potential of green assets in India and the Asia-Pacific region, also marked the launch of YES BANK‘s first Green Bond Impact Report, highlighting the outcomes of projects financed by the Bank’s three green bonds, as of FY17. The proceeds of the green bonds issued by YES BANK have helped fund renewable energy projects across nine states of India, and are estimated to generate 2.35 million MWh of electricity, annually. Additionally, these projects will potentially avoid annual emissions of 2.3 MT of Carbon Dioxide (CO2), 19 KT of Sulphur Dioxide (SO2), and 5.7 KT of Oxides of Nitrogen (NOX). YES BANK issued India’s first ever Green Infrastructure Bonds in February 2015, raising INR 10 billion, followed by a second issue of INR 3.15 billion in August 2015. In September 2016, YES BANK raised INR 3.3 billion by issuing a 7-year term green bond to FMO – the Dutch bank’s first investment in Green Infrastructure Bond issued by a bank in India.

Sharing his thoughts on the opportunity of green finance in India, Mr. Rana Kapoor, MD & CEO, YES BANK, said, “Green Financing has become a propeller of the global sustainability agenda and will play a mission critical role in meeting India’s climate targets. The government’s thrust towards transforming India into a low-carbon economy offers financial institutions and investors an unprecedented opportunity to leverage green financing as a growth accelerator for sunrise and climate positive sectors such as renewable energy. YES BANK has taken a lead in demonstrating innovative climate financing mechanisms, and catalyzing the Indian climate finance market. We are proud to partner and to facilitate global development banks in expanding their green portfolios in India.”

Commenting on the occasion, Ms. Linda Broekhuizen, Chief Investment Officer, FMO, said, “FMO is convinced that to accelerate green finance and to have a meaningful impact, it is essential that financial institutions, governments and international development finance institutions bundle forces. This event forms a unique platform to discuss the opportunity-side of green finance, connect the parties and propel local prosperity.”

Commenting on the occasion, Mr. Guillaume Barberousse, Head of Banking & Capital Markets, Proparco, said, “Green Finance is at the core of Proparco’s strategy, and it is even more true in India and the region. Proparco is therefore very happy to support the development of Green Finance through this partnership with Yes Bank, the leading player in that space in India and a long standing client of Proparco, together with fellow DFIs FMO and DEG”.

Commenting on the occasion, Ms. Karin Homermann, Vice President, DEG, said, “DEG as a development finance institution is focusing on green finance and has invested in the development of wind, solar and hydro power assets in India since 2008. We are looking forward to work on sustainable solutions together with our partners YES Bank, FMO and Proparco in order to contribute to India’s clean energy transition.”