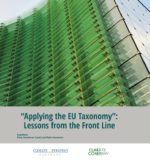 The EU plans a historic investment of up to €2 trillion in its economy from 2021. These will be provided from the EU Budget (MFF) and recovery funds (via Next Generation EU). A paper shows how the EU Taxonomy is a powerful climate tracking tool, and how it can identify and align public and private investments to recover rapidly and deliver the EU’s Green Deal.

▷ 30% of the joint NGEU and MFF budget package is earmarked for climate objectives; EU expenditure should be consistent with Paris Agreement objectives and with the objective of EU climate neutrality by 2050 and contribute to achieving the Union’s new 2030 climate targets.

▷ EU budget expenditures also need to be consistent with the “do no harm” principle of the European Green Deal. Operational guidelines for this principle are needed alongside a necessary exclusion list for fossil fuels.

▷ An effective methodology for monitoring climate-spending and its performance should ensure that the next MFF as a whole contributes to the implementation of the Paris Agreement.

▷ In this context, the EU Taxonomy should be used as climate tracking instrument in the NGEU and MFF to align EU funds, and recovery investments, with the goals of the Paris Agreement and to deliver the EU Green Deal, as:

• The EU Taxonomy is a proven climate tracking tool that can help identify investments which make a significant contribution to climate mitigation and adaptation.
• Early applications of the EU Taxonomy’s recommended climate contribution thresholds demonstrate the feasibility of how this can be done at the project/ municipal, company and fund level.

▷ Existing climate tracking approaches in EU funds (the “Rio Markers”) are imperfect and are shown, in cases, to significantly overstate climate contributions, thus undermining the credibility of the EU’s climate action commitment. In the three areas which the EU Taxonomy does not yet cover, Rio markers can be applied until the EU Taxonomy has been expanded.

▷ Consequently, reference to the EU Taxonomy as preferred climate tracking tool should be included in the legislation on all financial instruments in the NGEU and MFF, including the regulations on the Recovery and Resilience Fund, the Just Transition Fund/Public Loan Facility, InvestEU et al.

This paper targets Member States preparing Recovery and Resilience Plans, MEPs and EC officials debating the final details of the EU budget and Next Generation EU, and practitioners from the sustainable finance sector.

We show that the key elements of the EU Taxonomy are in place and already it is can be successfully applied in practice.