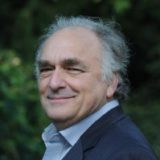 Robert Rubinstein wants to create an economy that nurtures well-being. For two decades, he has worked tirelessly to encourage business leaders and investors to join him. Rubinstein’s Triple Bottom Line Investing (TBLI) Conference is celebrating its 20th anniversary this week in Stockholm, Sweden.

The conference, which educates asset owners and managers about investment opportunities with social returns alongside financial returns, has been held 33 times across Europe, North America, Latin America, and Asia.

Although he was born in Brooklyn, Rubinstein has lived most of his life in the Netherlands.