Dutch pension funds hold massive stakes valued at over US$2 billion across 20 companies affiliated with the military in Myanmar, according to new research by Justice For Myanmar. Dutch pension funds ABP and PFZW collectively own stakes in 20 multinational corporations spanning the real estate, oil and gas, telecoms, and beverage sectors that are directly working with or linked to Myanmar military businesses or the junta. Justice For Myanmar also identified Bharat Electronics Inc, a company owned in part by the Dutch pension funds, that supplies defence equipment to the Myanmar military.

We call on ABP, PFZW and all other institutional investors to immediately divest from companies with longstanding, direct ties to the military and its conglomerates, and to demand that other companies halt all payments to military controlled entities immediately. Justice For Myanmar also calls on the Dutch government to urge the EU to impose immediate targeted sanctions against the Myanmar military, their businesses and significant business associates, and to advocate for a global arms embargo.

On February 1, 2021, the military violently seized power in Myanmar. Democratic institutions and processes were shut down, free media outlets were closed, democratically elected political leaders were arrested, and protesters and human rights activists were gunned down in the street. This weekend, over one hundred people were killed by the Myanmar military and its security forces. Despite the aggression and repression, millions of people continue to take to the streets to protest against the illegal coup.

Through their asset managers APG and PGGM, the two Dutch pension funds collectively hold US$2.3 billion in 20 companies linked to MEHL, MEC and its subsidiaries. The 20 companies can be divided into two categories, based on their relationship to the military: Companies with direct and long-standing ties to the military and military conglomerates, including a manufacturer of military technology, and companies that have a direct commercial relationship with Myanmar stateowned enterprises that came under the Myanmar military control following the February 2021 coup. The list includes major corporations such as Posco, Total, Hilton Worldwide and KDDI.

A 2019 report by the United Nations Independent International Fact-Finding Mission on Myanmar revealed that the military in Myanmar owns and operates two large holding companies: Myanma Economic Holdings Limited (MEHL) and Myanmar Economic Corporation (MEC). This business empire provides the military with enormous financial resources to fund their atrocity crimes and maintain their autonomy. The UN Fact-Finding Mission called on companies to cut ties with these military companies.

Chris Sidoti, former Member of the UN Fact-Finding Mission on Myanmar 2017-19 and Founding Member of the Special Advisory Council for Myanmar: “The UN Fact-Finding Mission reported on all we could discover but that was just the tip of the iceberg. The Myanmar military is a spectacularly opaque organisation and little was known before our report on its business operations. We disclosed what we could find and we encouraged others after us to continue the investigation. Justice For Myanmar’s identification of a company like Bharat Electronics shows that international investors must now be far more active in themselves identifying problematic companies. Those found to be in bed with the murderous military will inevitably suffer reputational damage and then shareholder pressure to disengage. For their own sakes, they should break these ties now of their own initiative rather than be forced into an embarrassing rupture.”

International guidelines for responsible investing developed by the UN and OECD Guidelines for Multinational Enterprises are clear that investors have an obligation to act in such situations. Investors are expected to divest from companies that have repeatedly failed to respect human rights and to encourage all of their investee companies to act responsibly, including stopping payments to and business with Myanmar military-controlled entities.

OECD Watch’s Joseph Wilde-Ramsing: “Through their ownership of shares in companies selling military equipment and doing business with the military, these pension funds have a direct link to human rights violations by the Myanmar regime. APG and PGGM must immediately divest from the military technology company and other enterprises that have direct or long-standing ties with the military. The investors should engage with other companies, such as the oil and gas companies, to insist that they follow UN guidance and halt all sales and payments to the junta. If the companies refuse to do so immediately, the investors should divest from these companies too.” 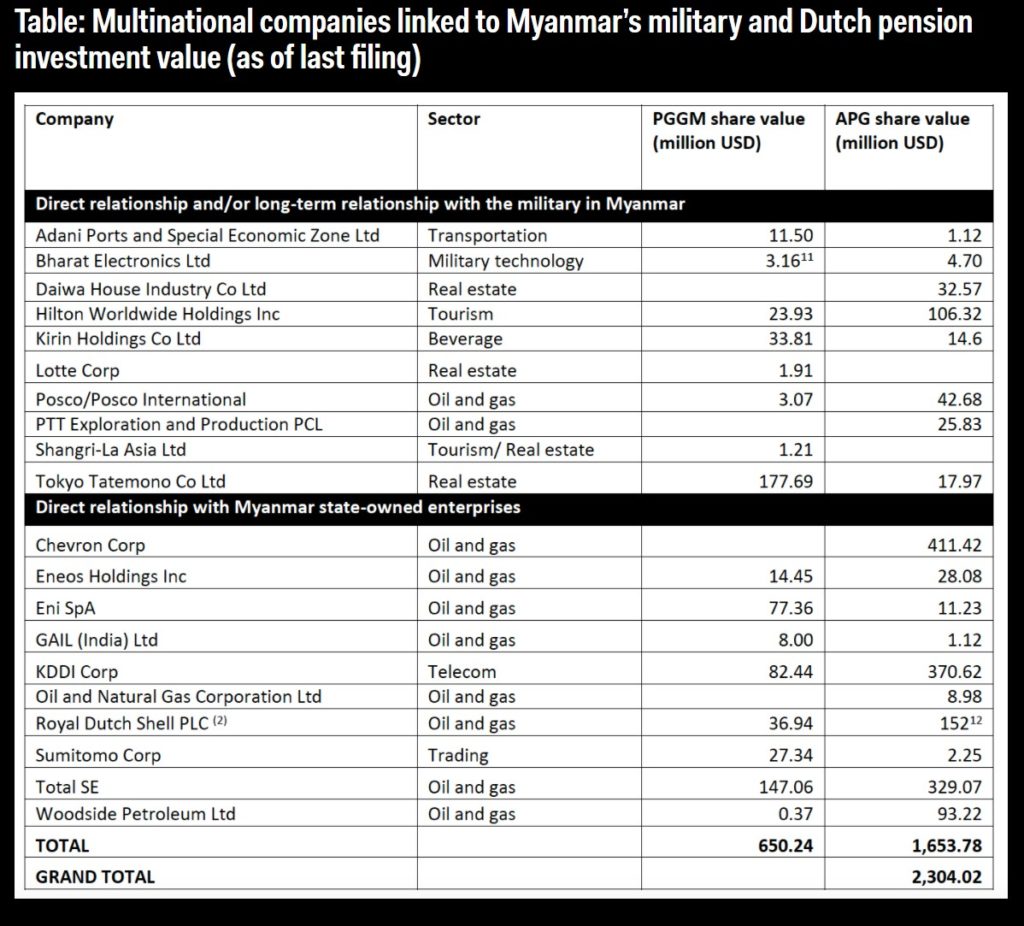